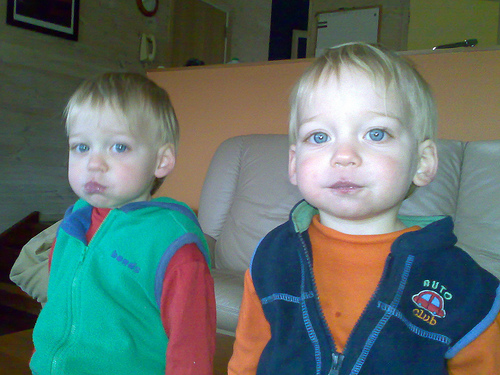 It’s been a few months since my last update on Cedar and Lucas, and of course a lot has happened in that time.

They’re moving from the ‘telegraphic’ phase of speach (two word combinations) to the beginnings of sentence construction. The other day, Cedar said ‘nice day outside’, which was a surprise to hear. And then, the very same afternoon, while reaching up towards the moon in the sky, Lucas said ‘get moon, tricky!’, which, aside from being one of the cutest things I had ever heard, was also quite a big conceptual/lingual jump in complexity.

They had their second birthday last month (their bday is September 11th) and Keri made them an amazing Thomas the Tank Engine cake (this is currently Cedar’s favourite show). Here’s Lucas giving a demo of that lovely blue frosting all over his face: Here they are talking one of their first walks around the neighborhood (Lucas left, Cedar right). Walking with us while holding a hand really took some work – their initial impulse seems to be to run at full pace everywhere all the time. But finally, we seem to have made some progress and they are getting into it. Now Lucas comes up to me and says ‘daddy walk?’ and he’ll grab my hand and lead me all over the house :-). They are active as ever, as the next video illustrates. Incidentally, only upon watching it did i realise that I had them confused – it is actually Cedar in the box. I wonder how often this happens but without the digital hindsight of video – and I would generally say (and I’m sure Keri would as well) that we always feel like we know exactly who is who…

Here’s a moment of calm (1 minute 10 seconds to be specific). The game that’s all the rage these days is playing ‘nitenite’ – getting a hold of anything blanket-like and then laying down where ever they are and covering themselves up. They also do a kind of snoring imitation – i have no idea where they picked that up, maybe from listening to each other sleep?.. Notice Lucas (on the right) is doing is silly face – he kind of stares off with a goofy smile, then starts sticking his tongue out. This is often followed by meowing, barking and or eating something without hands (this might be mocked eating, or the real thing). He’s a budding eccentric character, that’s for sure. I wonder where he got that from?.. The kiss Cedar gives Lucas is precious to be sure, however this is definitely the exception. How this clip ends (with them screaming over unlimited blanket rights) is more the norm… Headwear has also been in fashion this spring with a wide variety of pieces trialed in a very innovative market (Cedar): Lucas (on left) is having troubles getting his hat at the right angle. Meanwhile, Lucas is just fine:

Lucas at the park: Having a ‘sit down dinner’ as Cedar calls it (Lucas on left, Cedar on right) this is distinguished from their tenancy to be always on the move – even when you’re trying to feed them! Cedar on left, Lucas on right: That’s all for now folks!